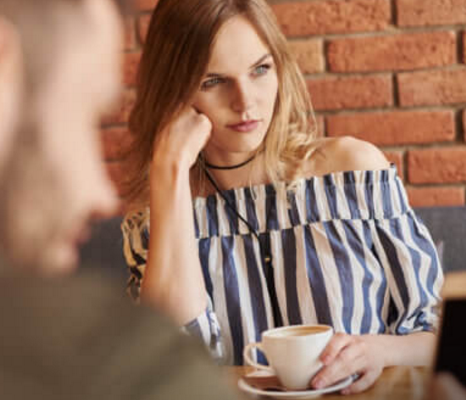 When my boyfriend pulls the “it’s just the way guys are” card, I can’t help but roll my eyes. Guys LOVE to make excuses for their bad behavior and often times they blame it directly on their biological impulses. The problem is, it’s BS. I’m not putting up with excuses anymore and neither should you.

I mean, seriously. I’ve seen my boyfriend play video games and guess what? He’s able to chat with people while he shoots up bad guys. Pretty sure that would be considered multitasking, am I right? I’m starting to think that guys use the whole “can’t multitask” thing as an excuse specifically in relationships to get out of trouble. I’m no longer buying it.

When he stares at a pretty girl in the street and I confront him about it, he instantly comes back with, “It’s just the way my brain works—men are visual creatures.” I get that guys are more attracted to female bodies than we are to males, but he should still be able to tone it down when I’m around out of respect, especially since he knows how much it bothers me. No excuses!

3. HIS “SIMPLE MALE BRAIN” SHOULDN’T BE USED AS AN EXCUSE TO GET OUT OF TROUBLE.

If he’s relying on his brain chemistry to get out of trouble, he’s honestly just being lazy. At this point, he’s not even trying to be a “better man.” I’m not saying that he should be a better man by my standards—he just shouldn’t let his caveman brain jerk him around. What I’m trying to say is that he doesn’t HAVE to be this way.

4. HE’S BEING DISTANT CAUSE HE DOESN’T KNOW HOW TO COMMUNICATE PROPERLY, NOT BECAUSE HE’S A GUY.

He claims that as a man, he “needs space” and gets annoyed when I call him to see how he’s doing. I highly doubt that this is just a trait of the common man. I’ve seen a lot of guys who are good communicators. Look at university professors, motivational speakers, etc. They’re masters at communication. Guys just often equate communication with expressing emotion and then run away scared. It’s totally possible to have a conversation with a woman that doesn’t involve crying, okay?

5. HE WAS LATE FOR DINNER BECAUSE HE HAS A “ONE TRACK MIND”? BS.

Guys love to blame their tardiness on their “one-track monkey minds.” It’s not their fault—their minds are just too dumb to process more than one thing at once. So maybe he got distracted by something on TV or had to finish a work assignment before he left—that’s not just something men do, that’s something jerks do.

6. HE SAYS THAT “MEN NEED TO FEEL FREE” IN A RELATIONSHIP.

Why is it that the second guys get into a relationship, they hold onto their freedom for dear life? For some reason, they equate being with someone as being trapped, whereas women tend to see a relationship as a way to be even freer than before and grow together. When will guys learn that their precious freedom isn’t going to suddenly be taken the second they shack up with someone?

7. SO WHAT IF GUYS HAVE A STRONGER DESIRE FOR SEX? IT DOESN’T EXCUSE CHEATING.

When guys describe the times they’ve cheated they have an almost casual way about it. It’s almost like they assume it’s expected from them because deep down they’re just dirty guys who have no control over their penises. A lot of times, guys will describe their cheating as accidental, which is totally ridiculous. If his love for his woman was strong enough, he wouldn’t let ANYTHING come between them, not even a biological impulse to sleep with a rando.

8. HE BLAMES HIS BAD LISTENING SKILLS ON THE WAY HIS BRAIN IS WIRED.

Sometimes when I talk to my boyfriend I feel like he’s not taking anything in but when we get together with friends, he seems to be all ears. I don’t think it’s a natural function of a man to have bad listening skills—I think it’s just him not caring about what I have to say or assuming that whatever I AM saying is going to end in him getting in trouble. Guys just aren’t good at listening to WOMEN, not people in general. Ugh.

9. HE SAYS THAT MEN ARE MORE EASILY TEMPTED THAN WOMEN.

Men tend to claim that they have an insatiable desire for sex that us women will just never be able to understand. They say it’s like they’re being possessed by their genitals and that no matter how hard they try to fight it, they just can’t say no. Although sexual drive plays a big part in adultery, nothing is ever so black and white. There are plenty of guys who DON’T cheat when they’re given the opportunity, so what’s the excuse now?

By  Jennifer Lee for Bolde