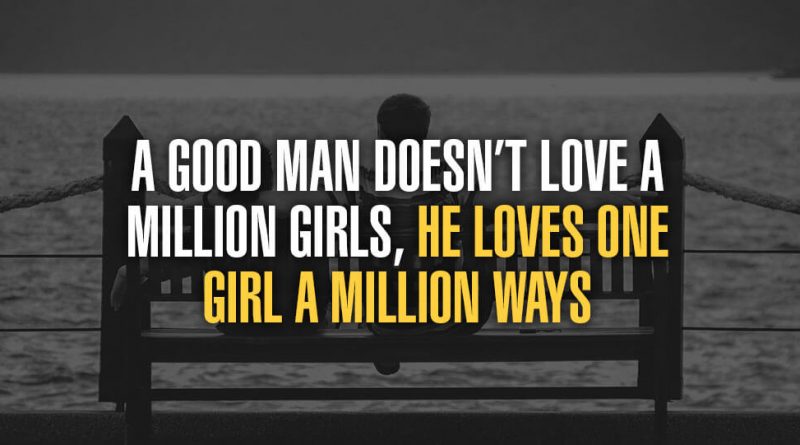 A good man isn’t going to run away from you at the first sign of trials or difficulties.

It won’t always be obvious right away whenever you meet a good man. You won’t be able to tell right off the bat that he’s a guy worth being with. A lot of times, a good man can seem very shy and withdrawn; but the truth is, he just doesn’t want to come off as too forward or to aggressive. He doesn’t want to pressure you into being or doing anything that you’re uncomfortable with. He is always going to be respectful of your person and your character. So even though he comes off as someone who is passive, it’s only because he wants your relationship to blossom and grow at its own pace, at its own time.

A good man is going to date you the right way. He’s going to be honest with you upfront about his intentions and his expectations. He isn’t the type of guy who is going to be leading you on. He isn’t someone who is going to be dating you tonight and another girl tomorrow. No. When he is going to date you, he is going to date YOU and YOU alone. It may take a while for him to really warm up to you. It may take him some time to really open himself up; to allow himself to become more vulnerable. But that’s only because he doesn’t want to make you feel like you have to do the same. He doesn’t want to make you think that just because he’s letting you into his life completely that you should be expected to do the same. He isn’t going to demand too much from you too soon. He is going to understand your need for time and space. He knows that patience is vital if he wants to make something of the love that you have for one another.

A good man isn’t going to run away from you at the first sign of trials or difficulties. He is going to want to work everything out with you whenever things start getting challenging in the relationship. When there is a rut in the relationship, he is going to try his best to fix whatever problems you might be experiencing just so he can get things back on track. He isn’t going to threaten you with the idea of leaving you and dating another girl just to get you to submit to him. He is never going to force you to see things from his perspective if you don’t want to. He respects that you have your own individual mind that isn’t always going to mesh well with his. He loves that about you. He loves that you are able to stand your own ground despite the fact that you are in love with one another. He is a man who is going to respect whatever boundaries you have for one another. He is a man who is going to value your sense of identity. He is a man who is going to love you even when it’s difficult to do so – because that love, the difficult one, is the best kind.

A good man isn’t going to grow complacent whenever things start getting serious and steady with you. He is someone who understands the value of always putting in the work and effort to make sure that your love lasts. A good man isn’t someone who is going to make you do all the work. A good man isn’t going to be content with just receiving your love and never reciprocating it. A good man will never stand for a one-sided romance. He is going to give to the relationship just as much as he’s getting out of it. He is a selfless man who would have no problems putting the needs of your relationship above his own. He loves you so much that he is willing to make all of the necessary compromises just to make you happy. He loves you so much that he considers your happiness to be his own happiness as well. You never have to worry about this man’s love fading away – he’s always going to give you all of his unfiltered, undivided, and unblemished love.