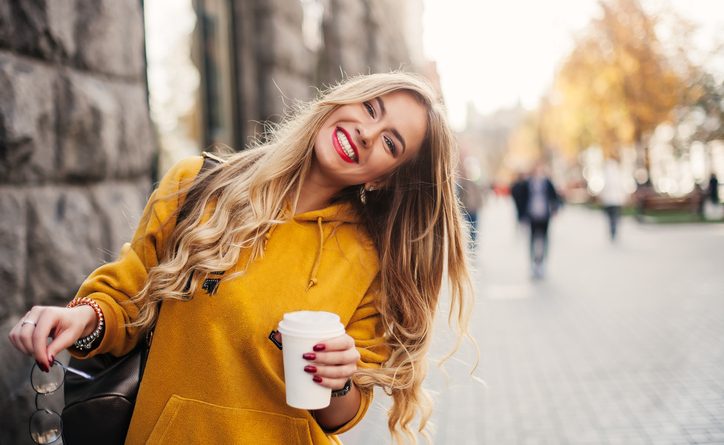 I spent 13 years in Catholic school, so it’s been somewhat ingrained in me to be respectful and kind—love one another as you wish to be loved, you know? However, when I got into the harsh dating world, I quickly realized that being nice was getting me nowhere with guys, so I stopped playing nice and holy crap, it worked.

1. WE’VE ALL HEARD THAT “NICE GUYS FINISH LAST” BUT IT’S NOT JUST GUYS THAT SUFFER.

Literally everyone has heard that nice guys finish last, but I’ve never heard someone say the same about girls. Given that, how was I supposed to know that my sweet disposition would come across as super lame to every guy I showed interest in? In reality, I thought being nice would make me more attractive. Wrong!

2. I THOUGHT I WAS JUST UNLUCKY IN LOVE.

Date after date, I came out thinking that it went incredibly well. We were connected and the conversation flowed, but date after date, I waited by the phone for a call or text that wouldn’t come. Am I not pretty enough? Smart enough? Sexy enough? I replayed the details of my date over and over in my mind and came out completely baffled. I assumed that I was meant to be alone. I was doomed to become an old cat lady and it was time to give into my destiny.

After an actual meltdown with my best friend one night consisting of ugly sobs and ice cream pints, she finally told me the truth: I’m too nice. She explained to me that the nice girl is as interesting as a blank wall—there’s no intrigue. Men like a feisty girl with more layers than an onion. Furthermore, I’ve simply become a “yes” woman who lets everyone else call the shots even when I disagree because I’m constantly prioritizing the happiness of others. As she continued to unload this life-changing information, I started to resent all of those Catholic school nuns. They’d never been in a relationship, obviously, so they blindly led us to failure.

4. MY BFF HELPED ME REALIZE THAT MY “NICE” ATTRIBUTES CAME OFF AS A LACK OF CONFIDENCE.

Guys like a strong woman who’s not afraid to ask for what she wants, not a timid girl who won’t stand up for herself. I don’t want a guy who’s a doormat, so why did I expect that men would feel any differently about me? The funny thing is that I generally consider myself to be a confident person. The not-so-funny truth was that the more rejection I faced, the more my appearance of low self-confidence became reality.

5. IN THIS NEW AGE OF DATING, WOMEN MAKE THE FIRST MOVE.

I was sitting back like a corseted, proper 16th-century woman, waiting for the suitors to come and line up at my door. All the while, men are getting swept up by the women who text first and lean into a kiss without fear of rejection.

6. BEING TOO NICE IS TOO MUCH IN THE EARLY STAGES OF A RELATIONSHIP.

Is it possible to suffocate from kindness? I often found myself coming off as overly attentive and way too available. The more I tried to control it, the stronger the urge to text. This is great if you’re in a comfortable, long-term relationship, but in the early stages, you appear as needy as four-year-old. It wasn’t until I dated a nice guy of my own that I realized it.

7. THIS DOESN’T MEAN THAT MEN ARE LOOKING FOR A TOTAL BITCH.

In my awkward transition from “nice girl” to “multi-dimensional babe,” I had some missteps. On one particular occasion, I was a total bitch to the guy I was on a date with. I disagreed with everything he said just for the sake of disagreeing and was just a little too brash. It felt totally unnatural to me and he wasn’t having any of it. The date ended quickly and I left feeling embarrassed.

8. I FOUND THE RIGHT BALANCE AND IT RESULTED IN A REALLY HEALTHY RELATIONSHIP.

The best part about giving up the “nice girl” act was that I was able to stand up for what I wanted and vocalized my priorities in the relationship. A weekly family dinner is important to me, so my now husband always makes time for it. The old me wouldn’t have “inconvenienced him” with the invitation and he would have used my family dinner night as an opportunity to go out with his boys. I never feel any sort of animosity and I don’t feel like I’m constantly sacrificing. It was the best change I could have made for my happiness.

9. IT’S GREAT TO BE NICE, AS LONG AS YOU SHOW THERE’S MORE TO YOU THAN THAT.

You don’t want him to leave your date and simply describe you as “nice.” You want him to say, “She’s sexy, smart, intriguing and to top it all off, she’s kind.” You have it all, so don’t be afraid to show it!

By Caitlyn Goerner for Bolde