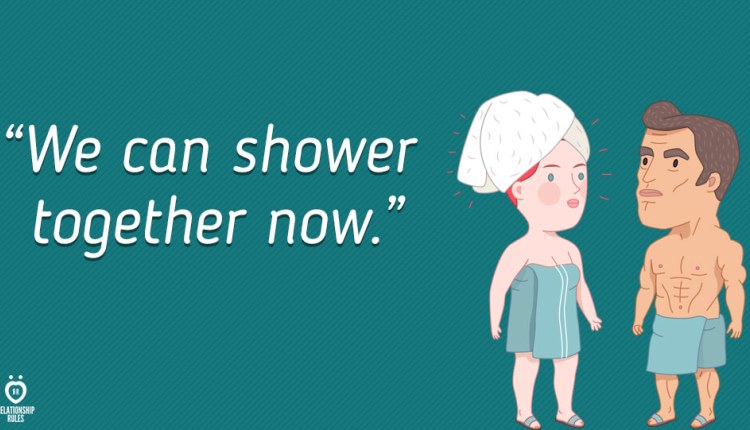 Relationships are all about comfort in being yourself. However, in most relationships it takes time for the guy to be completely himself. In the beginning of any relationship, a man always keeps up a curtain, but as the time goes on, the curtain is drawn and he starts doing things in front of you, that he doesn’t do in front of anyone else. Keeping that fact in mind, we’ve compiled an insightful list of all things he will do only if he is in a committed relationship with you.

Once you are in a committed relationship, his restroom use becomes open and shameless. On the other hand, at the start of the relationship, he would have never used the restroom in front of you or when he was staying over but things are different now! He is committed to you, he uses the restroom for as long as he pleases, he leaves the door open and sometimes, he even forgets to flush the toilet.

It is a universal fact that men’s undergarments tend to get annoying every now and then. This annoyance leads to the readjustment and/or scratching the crotch area. Before he was in a committed relationship with you, he used to do those things in private or when you weren’t looking but now.. Now he doesn’t care, now he does it whenever he wants to even when it doesn’t need readjustment. Hell! He will even do it while making eye-contact with you.

Another magical aspect of committed relationships! He will fart and burp whenever his body calls for it. Gone are the days when he never used to fart in front of you. Now, his farts are like roars of a thousand lions. And the best part? He isn’t embarrassed of them. If anything, most couples laugh at it.

Coming to the burps! He burps like there is no tomorrow, right on the dinner table and doesn’t even say excuse me afterwards and why should he? He is in a perfectly secure relationship and he is being a human being that farts and burps.

4. He will shower with you

In serious relationships where you and him are living together, he will probably start his day by showering with you. It does not have to be a romantic gesture but just something he does. Also, don’t be alarmed if he uses the restroom as you are showering. At this point in the relationship, he finally considersВ you an extension of his own self which is why he is perfectly comfortable being himself around you.

Another shower related aspect is that he will sing in the shower we all do- in front of you, without being self-conscious even if he sounds like a goat.

Most men get lazy after getting in a serious relationship. Once they feel secure enough, they stop worrying about their clothes, grooming and scent. Chances are that your boyfriend will get lazy too. He will stop going the extra mile getting ready for dates because he knows that you accept and love him in any condition. He might even go days without showering or shaving.

6. He speaks his mind

Now that you are in a serious committed relationship, your boyfriend will always speak that’s on his mind. He won’t just say the things that you want to hear. He will give you his honest opinion in all things not worrying about the rejection of his opinions from you. Yes, he will even tell you if you look bad in your new hairdo.

When the relationships are new and shiny, men give most of their attention to their partners but as the relationship becomes comfortable, they start to bring the balance back in their lives. Even though you are still one of the most important aspects of his life, your boyfriend will start to divide his time to the previous balance and that is a healthy thing for both of you. He will pursue the things that used to make him happy and he will integrate his previous habits into the relationship.

Don’t get us wrong. We don’t mean ignore in its ugly form. He just doesn’t feel the need to give you most of his attention. It is okay if he takes a while to reply to your texts or to return your calls, it just means that he feels secure with you and knows that you understand that he might be busy. Also, he knows that he will be spending time with you later and will be able to give you his undivided attention.

9. He won’t hesitate asking you for things

In committed relationships, men finally feel confident enough to voice their needs directly. You can finally stop trying to be a mind-reader because now you are being told what they want from you. Among other things, he will ask for your attention directly without the fear of it being interpreted as needy behavior. Let’s face it ladies, there is no such thing as neediness in a long term commitment.

In the start of the relationship, he was always nonchalant regarding his feelings. Men are wired to keep their emotions inside when they meet someone new but with time, you are getting to have a deeper insight into his life. He now feels secure enough to share all his secrets with you and lets you in completely.

Another thing that he will share with you is his deepest and darkest desires because he knows that you won’t judge him for them. Moreover, he will also entertain any fantasies or desires that you might have too. You both will tell each other things that you have never told anyone before. He will have long pillow talks with you. He will let down his guard and let you in completely.

12. Letting out his emotional side with you in romantic situations

Have you ever seen a man cry during emotional movies? I don’t think so. It’s because they never do it in public or in front of people. However, in a committed relationship, your man won’t hold back his tears during that emotional movie you guys are watching together. He won’t shy away from romantic conversations and he will definitely won’t suppress his feelings about the relationship.

Your partner will talk to you about money. He now feels confident enough in the relationship to talk money with you. Emotional support is not the only things couples share when they live together, he will probably start sharing the financial expenses too if you have moved in together. Moreover, he will also share his financial problems with you if he has any.

He will whine about things that bother him, they can be big things or the small ones. He will complain from things ranging from weather to the universe. He won’t filter his negative thoughts and share every little complain with you expecting you to either support his opinion or nudge you towards the optimistic side. In simple words, you will be the person he comes to in times of crisis, both small and big. He knows he has someone who will listen to him and give him her honest opinion and full support.

If you catch him snooping on your phone in the middle of the night, don’t be alarmed. He isn’t being insecure. He is just acting out of habit. Ladies! Forgive them if they apologize right after and don’t accuse you of things. Some people even consider it cute that their partners are playfully keeping an eye on them every now and then.

You know that he is very serious about the relationship when he lets you invade his privacy. Men are very sensitive about their private lives but if he is letting you use his phone and laptop and hasn’t put passwords on them then you are one lucky lady. And you know what? In every relationship, there comes a time where the partners share everything.

Ladies! If your guy is doing even half of the aforementioned things with you, rest assured that your relationship is headed in the right direction and with time, it will flourish to new heights. Moreover, every man goes through his own process in his own time. Patience and perseverance is the key element in every relationship and if you can master that process, you can master your relationship.