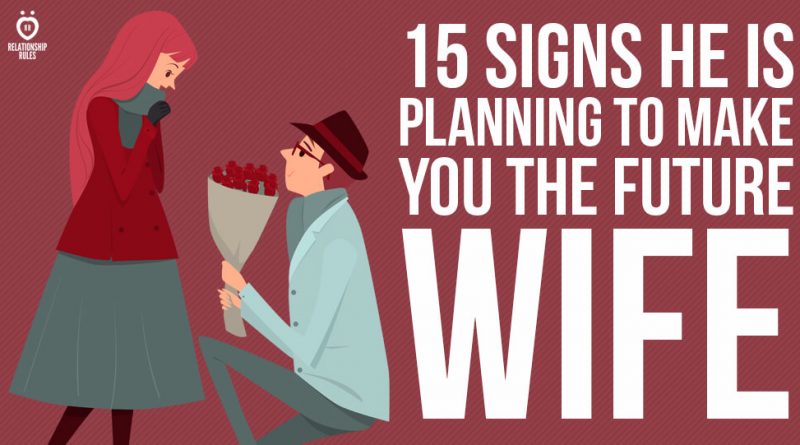 After staying together for a long time you start wondering if he is planning to propose you for marriage. All sorts of questions start popping up in your head and you can’t help but wonder if he is going to do it. Don’t worry—the worrying is normal and in fact healthy and you deserve to expect a lifelong commitment. You will, of course, not ask him out in the open if he is thinking what you are thinking because things can get awkward then.

There is a way you can tell if marriage is on his mind or not, if he thinks you are his future wife or not: by taking hints from his actions.

Now these hints will only give hints but pretty strong ones. See if your boyfriend has been doing these 15 things lately and decide if there is a chance of a marriage proposal anytime soon.

Some time ago, he was a reckless spender. He did not care about where his money went and was almost always the first one to propose buying something you two did not need. Now he will try to control his hand on cash and will probably not buy all those expensive good-for-nothing souvenirs because money is important to him all of a sudden. There can be many reasons behind this change of habit, one of which can be this: he is trying to save up for the marriage he has planned. He secretly stashes up money telling you it’s for a rainy day.

His speech can tell you a lot about what goes on in his mind. For example, when he talks about something that should, generally, only include him, he decides to include you too. Whether it is going on an adventure and talking about his future house, you will see him using ‘we’ instead of ‘me’. In his mind, every important thing is done with you on his side and he never, naturally, forgets to include you as if you are always there on his mind and he can never make the mistake of imagining life without you. This can be pretty easy to notice.

3. All His Friends Are Married:

One good thing you can do to figure out if he is planning to make you his future wife or not is to analyze his group of friends. If they are all getting married one by one and are happy about it, chances are that your man is planning to join the married men cub soon. Friends are a big influence in everyone’s life and even if you plan different things for yourself, your friends’ stories can make you change your mind and follow their lead. If he appreciates the happily married lives of his friends and you find yourself having double dinner dates with his married buddies, this is it.

When a person starts looking at you in a different way, the way they treat you also changes. If your role in your guy’s mind upgrades from that of a girlfriend’s to a wife’s, he will put that idea into actions unknowingly. He will start including you in big and small matters of his life and asking for your opinions about things that really matter to him. Before finalizing any decision, he will make sure to run it by you and consider your take on it. He wants to make sure that everything big or small he does in life is acknowledged by you.

A great sign of someone being wholly interested in you is them opening up to you about their life, their fears and their insecurities. Even Dexter, the serial killer, put Rita in doubt until he accepted his inner self and emotionally opened up to her.
He being open about his feelings cannot directly mean that he intends to marry you although it does say a lot about his trust level when it comes to the relationship. He thinks of you as someone who deserves to know him as well as he knows himself. It means you are special and he might want to keep you special for life.

You know your tantrums will be handled the way you need them to be handled when it is around him. You know that he will have an answer to all your confusions and he will be willing to help your mood get better without being annoyed for once. The greatest couples have this in common; they are ever ready to deal with each other’s shit without giving up. So if he handles your level of crazy like nobody ever has and does not mind it, you two are meant to be together.

7. He Does Not Mind Shopping With You:

You know he is serious about when the little things you do make him want to be a part of them. No guy agrees to go shopping with a girl unless he is really, completely into her. Most men, who are apparently not-so-interested in their girlfriends’/wives’ activities, wait outside the shops while their girlfriends take their time to decide if they should buy that one cute nail color or the fierce one. With your guy, if it is the opposite, you are very special to him. If he helps you shop and is always there to solve a problem, he loves you enough to marry you.

Couples these days lack the one very important factor without which relationships cannot survive for long: trust. Cell phones, especially, say a lot about how much you trust a person nowadays. If your guy has always been open to you and has never felt the need to password protect his phone from you then he really trusts you. This kind of trust, where there are no secrets to be afraid of, says that he has invested in you enough to keep you forever. You know everything about his life from his first crush to his last ex-girlfriend. His bank accounts and credit cards are all, very casually, shared with you. Even if he takes some time to let you in on all of it, what matters is that he did let you in. Trust takes time and you will know it when you have earned it.

9. He Believes in Your Dreams:

For a man to like someone enough to think about marrying her, it is important that he is aware of everything the woman he loves wants from her life. It is necessary for him to know your dreams and aspirations and believe in them just as much as you do because there is no point in planning a life with someone whose aims are hidden from you, who does not value you enough to let you in on their plans. If he believes in your dreams and agrees to hold your hand while you move towards them, he probably thinks about making you his future wife.

You two have the same twisted humor that makes you two feel connected more than anything. You tag him in memes and he tags you in memes while the rest of your friend list grimaces at the quality of humor of those memes. He loves the fact that you find funny what he finds funny. You two connect on a deeper level, laugh on jokes that nobody else gets. Besides trust and love, this little comical connection might make him want to keep you forever.

Family plays a very important role in the future of you two, or at least in determining if you two will have a future or not.
The fact that his family knows you, first of all, is enough to give you a hint that this is not temporary. And moreover, if his family likes you then there are even greater chances of having a future with him. His mom and dad will suggest marrying you because they like you so much.

There will, obviously, be money problems in terms of not having enough but there will be no money conflicts: his money is your money and your money is his. If one of you two earns more, the other won’t mind and if the other is jobless, there will be no count kept when money is borrowed. If such is the case between you and him, it shows that your relationship has enough understanding that money, the great devil, cannot weaken it.
Although money has to be spent carefully and the care has to be two-sided, his financial help to you means that he thinks of you as someone worth spending on which shows his unmatched attachment.

By Kaetlyn Summers for RelRules